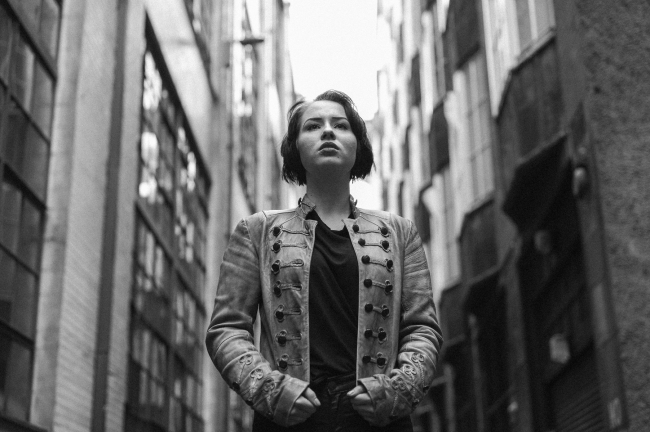 I just had these two frames sat next to one another on the screen and found the comparison interesting. Not a million miles apart to be honest.

Not enough sway is given to developing ones style these days. The current trend appears more equipment driven and not learning the craft, art and soul of photography. Style can not be bought, faked, copied or forced. It comes through practise, dedication to your craft and natural development through spending time learning to understand what photography means to you personally.

I would personally say that I’m only just beginning to notice my style surface, I’ve learnt the more I try to concentrate on it the further away I end up from it.

"Only In Your Truth Do I See My Lies", a photo by bang* on Flickr.

Visual poetry for your eyes. Fleeting metaphors of light and darkness frozen in silver for the ages”

Leica on set | JimBagUK SS13 Campaign, a photo by bang* on Flickr.

A moment of clarity and calm amidst the hustle and flow of a fashion campaign shoot.

Yes the eagle eyed amongst you may have noticed that the model number of my Leica has lost a couple of integers . . . . .
Bye bye M8.2 hello M6, hello LeicaLove. Only problem with it is it gets really really really cold when shooting outside in minus temps (I guess an all metal body will do that though, small price to pay for the pure pleasure that comes with creating photographs with it)

Have I mentioned that I love my Leica?

I know I’ve posted an early version of this shot already but here it is all finished up (just about after a re-scan) super happy with it, although I have managed to pretty much kill the negative via an oversight and a school boy error. At least I’ve got my scans.

Here’s a film version of the digital shot I used from this shoot. Just preferred the expression and pose of the digital, love the soul of this Tri-X shot though.

It’s that time of year again. Back on the bike a little more now that the weather is picking up.
Chance to give the CL a go with the CV 15mm f4.5. Hella wide!
Also playing with TriX a little, iso 1600 and some beautiful punchy negs.

Sometimes the world stops to take a breath. This is where you will find me waiting.
Visual lyrics forming a poem for my eyes.

Oh the reason? I kinda guessed that was obvious.

(C)over boy // Reworked by himself, originally uploaded by bang*.

Another from last week with Jaime, well I say another it’s the same shot from before but with a little something something. He’s somewhat of a creative man and put this together. I dig it and figured I’d share the love. Check out more of Jaimes stuff here jwandsmurrayillustration.tumblr.com/

Using the film cameras more and more for these shoots. Partly as I’m starting to trust that they still work and partly as I’m still in love with that little difference that the film look has.
I’m still running with the Film26 project, 26 two week periods of the year where we work through the alphabet for subject matter. You may now understand the title of the photo & this post.
I have to say I’m blown away by this little rangefinder. Previous to the CL I’ve used a rare (simply because they’re kinda worthless and mostly broken) Lordomat & a Yashica MG-1 (cheap as chips fixed lens “compact” rangefinder from the 60’s (ish).
Before you all get “I thought you were immune to G.A.S.” this was all early(ish) last year during my long term GAS illness.
Now the Lordomat was my first rangefinder camera and for that I dig it, it is also a thing of beauty. All chrome and metal and heavy. The lens was actually pretty good if slightly dreamy wide open. I just hated the tiny (and I mean tiny) viewfinder. So I started looking for something to replace it with (whilst ignoring the Leicas) I really wanted something handy but also quick to use almost as a snapshot camera. So I headed into the muddy waters of 60’s Compact rangefinders. Compact is a laugh, you’ll see if you ever pick one up. The Olympus 35 SP was my real aim but not for the price they now go for. So I stuck with the Yashica Electro that isn’t a Yashica Electro and only cost me £15. It’s okay, shot plenty of stuff with it but the aperture priority only shooting mode really started to bug me as I had to rely on the meter firstly being right and secondly being accurate.
So to the Leica CL. This is pretty much exactly what I’ve wanted from a rangefinder since I discovered how much I like them. Sure i’ll admit it isn’t a Leica M but it takes M lenses and shoots the same film. It’s lighter, smaller and has a built in meter (which works). Plus if someone asks to see it I’m not going to have to ask them to pay a deposit before I hand it over.
Maybe soon I’ll run through my medium format camera of choice these days. I’ve been trying a few different systems (via a process of begging and borrowing) over the last 6 months or so and I’m now feeling sure that I’ve found my camera.
So more film coming from me in various sizes, type and such. Five rolls went to the lab yesterday and I’m planning on running a good few through the cameras during my shoots this weekend.

Oh happy Valentines and all that too.

One for the Film26 group, which is an ongoing project for me this year. This time around it’s “B”. Took the ‘B’ronica along for the ride on my last shoot, loaded with some Kodak (‘B’ankruptcy) for some ‘B’lank & white. I reckon I covered my ‘B’ases with this. The odd mark bottom left is on the neg, looks like this roll fogged a little as this was the final frame.

So then, Kodak . . . . . . . . that’s going to be springing crazy internet based fear mongering if ever anything has. It’s the end of the world!?!
No it’s just the end of a chapter, the story has a long way to go yet, with many a twist and turn remaining I’d predict.
The industry isn’t dying, it’s in a state of change and an exciting change at that. Stop looking back and thinking all the best times are behind us. This is the best shot you’ve ever got, step up and make it count or go and make room for somebody else.